Sunday sees us not just on any old street but on Cowley Road, helping play in the start of the annual carnival from outside the City Arms pub where Magdalen Street joins Cowley Road. We’re on at 11:45am, which we appreciate will sound early to some of our friends. However, it is ideal timing to watch our set and then get in position for watching the procession so no excuses!

We’re on again tomorrow night at Donnington Community Centre (Townsend Square, OX4 4BB). The Donnington Doorstep charity does excellent work in the local community and the event raises funds for that. It’s also a chance to hear all sorts of local musicians (including your friendly neighbourhood String Project).

The event runs from 2pm – 10pm and we’re on sometime mid-evening.

Does it tell you everything you need to know about English (inglish) that there is no easy way to tell from that title if this post is about following the dots or an event happening near a town in Berkshire? In this case, it’s the latter: 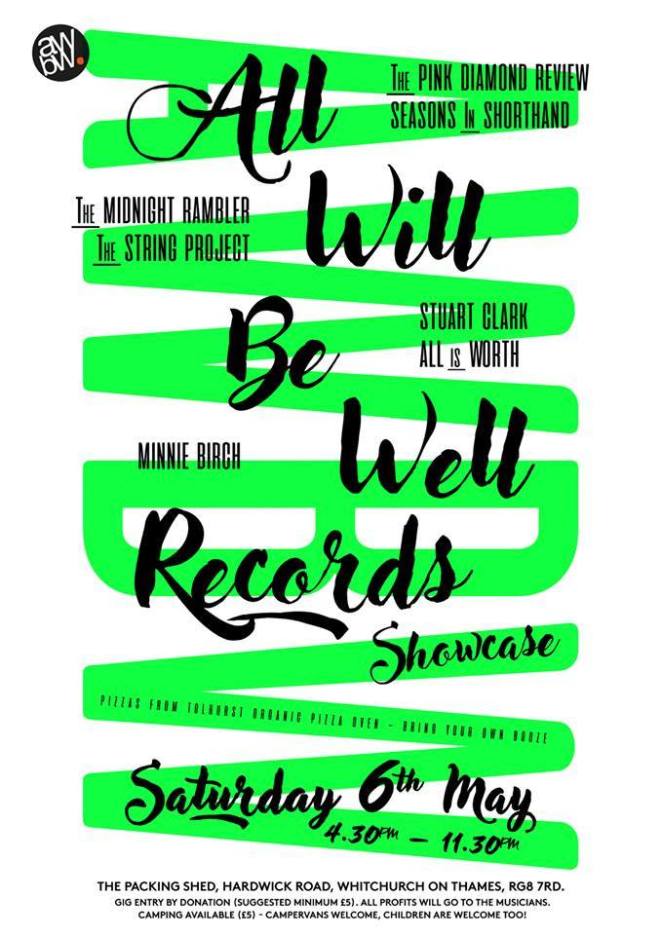 We’re due on at about 8pm but, as you can see from the poster, music goes on from late afternoon until early evening. You can even camp!

All will be very well.

It’s about time we did a gig again so, masters of originality, we’re back at the Furry Mic night again tomorrow. The String Project is due on just before 10pm but the evening starts shortly after 8pm so do come along early. The Christmas special was at the James Street Tavern but this is back to the Furry’s regular venue of the Mad Hatters (43 Iffley Road). Free entry (although there will be a collection going around for a local worthy cause – not just a community event but one with a generous heart too).

This autumn has mainly been about tweaking and thus fairly quiet on the gig front. We’ve said goodbye the to inimitable Martin Ash, who might be back as a guest from time to time but has a somewhat busy schedule with a couple of highly active bands and his other wide-ranging musical activities. To balance that, we’ve welcomed Harry back on vocals and also a lot of keyboarding. Also, rather than trying to find another string player to even attempt to fill Martin’s boots, we’re experimenting with Dan breaking out his flute skills to add another melody voice.

As you can imagine, this involves a fair amount of rehearsing to fit existing material around the line-up and to work on one or two new things too but we’re finally ready to take the covers off. This week we’re doing a short guest slot at the Furry Mic session. That normally takes place on Iffley Road but this week is at the James Street Tavern. Yep, the one in James Street, East Oxford.

Yes, you’ve probably seen us there before but not quite like this, so pop down this Wednesday and make sure you’re there before 9:45pm when we’re due on. Make it simple and just get there for 8:30pm, when the session starts (free entry). Back in the game!

Our next outing promises to be fascinating as there’s a good chance we won’t be the most left-field band on the bill. Okay, Platypus (who we supported at Jamboree in London in May) were also somewhere out there but, if you are in Oxford on 22 October, you can see us supporting Penny Rimbaud, Eve Libertine and Louise Elliot at East Oxford Community Centre.

Rimbaud and Libertine were part of seminal punk band Crass about 40 years ago and have kept on pushing creative boundaries. Teamed with saxophonist Elliot they are going to perform The Poetry of Jazz and the Jazz of Poetry. Meanwhile, the ‘Project will be doing their thing helped by a couple of special guests.

Tickets are £8.50 on the door and you can keep up to date on the Facebook page for the event.

We’re back! After a break over the summer and resuming rehearsals earlier this month, we’re hitting the boards again this Saturday with a slot at Donnington Community Music Festival, near Donnington Bridge in Oxford.

The event as whole runs from 2pm – 10pm (free entry) and we’re on shortly after 8pm. Let the tune play!

We gladly did our bit for East Oxford and the Cowley Road Carnival today by opening the stage at The City Arms with a punchy half-hour set.

Thanks to the organisers for the set up, other bands on the bill for the loan of one or two bits of kit (lovely bass amp! Cheers to Sandy of Echopraxis for the loan of that). On the “pictures or it didn’t happen” rule, thanks to @RuthiBrandt for a great shot of the gig. And thanks to all those who came along and formed an appreciative audience – behind the photographer in this shot but you guys make it all worthwhile.

We’ve been keeping quiet for a few weeks, working on new material, but it is almost time for us to put our glad rags on again as we’ve got not one, not two but three gigs next weekend.

Two of those are for private events but fear not. There is a chance to see us – and for free – when we take part in the Cowley Road Carnival on Sunday 10 July. We’ve been invited to open proceedings at The City Arms, towards the Cowley end of the road. Our set is a relatively short one (12:00 – 12:30pm) so no faffing about between songs.

So come down to enjoy the show and then you can decide whether to stick in the City Arms all afternoon or use it as a jumping off point to wander back down the road. There is certainly excellent music on offer all afternoon at the City Arms from local bands like Flights of Helios and a number of visitors. Plenty of choices but our advice is, naturally, to start with us. 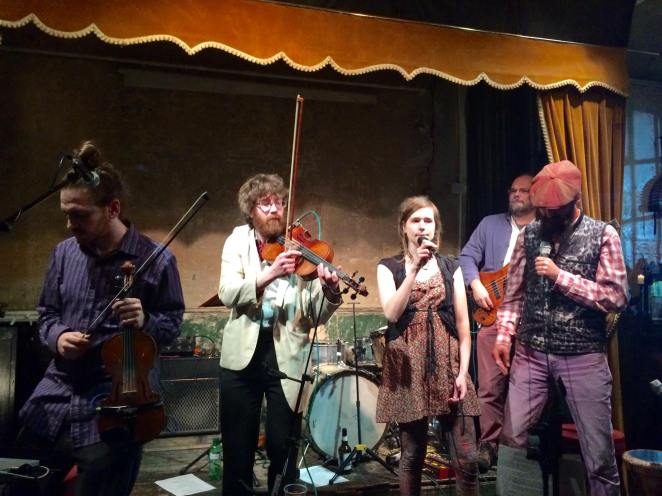 And if you thought the String Project were surreal, that was only the start …

Saturday was baking hot (just in case you’re reading this from a different climate zone or slept through the day altogether). So much so some of us weren’t sure anyone would squeeze into the shabby chic ex-industrial unit buried in a disreputable corner of the one-time Docklands that is Jamboree. But squeeze they did, in surprising and enthusiastic numbers.

Headliners Platypus, even without the animal and ninja masks they donned for performing, took long enough soundchecking trumpet, assorted Latin percussion, retro guitar effects, electric upright bass, the house piano and a vocal effects pedal to sound like a megaphone that Ben doubted we were getting a soundcheck. Oh ye of little faith. We had similar issues (both bands had to get more than half a dozen people on a stage that is comfortably cozy for a four-piece using a drumkit; balancing a combination of acoustic, electric and electronic instruments; using the piano in order to save the space of your own keyboard; more mikes than you can keep track of; instrument-swapping band members), but ended up with excellent sound that the crowd loved; credit to our own John Deans and house man Lassus (I think).

This post-er has played Jamboree before with ‘the other band’ (like the other woman without having to say ‘It’s not what it seems’), and knew the crowds take to weird unusually well. They took to us very well and even danced before we got to the high-energy closing couple of numbers. I definitely caught sight of singing along in originals; we just about managed to persuade those who weren’t propping up the bar at our second number to get down and rise with us on ‘We can Be the Proof’ (a prospective crowd-pleaser we’d only just brought back into the set); and fair play to everyone who loses their inhibitions far enough to rap along with a live band in a venue small and bright enough for people to see you, even if the band are covering ‘Gangsta’s Paradise’.

And then Platypus came on and illustrated we could have pushed the envelope much further. I mean, what do you say to a band given edge by a trumpeter playing through a hole in the neck of a frog helmet? With zebra mask on stand-up bass and a 5’6″ black cat off the front edge of the stage rocking the cowbell and temple blocks? I don’t think any of their songs clocked in under 5 minutes or had the intro and the chorus at the same speed. None of which stopped some of the most frenzied dancing I’ve ever seen at gigs – only half of it supplied by members of the Project. 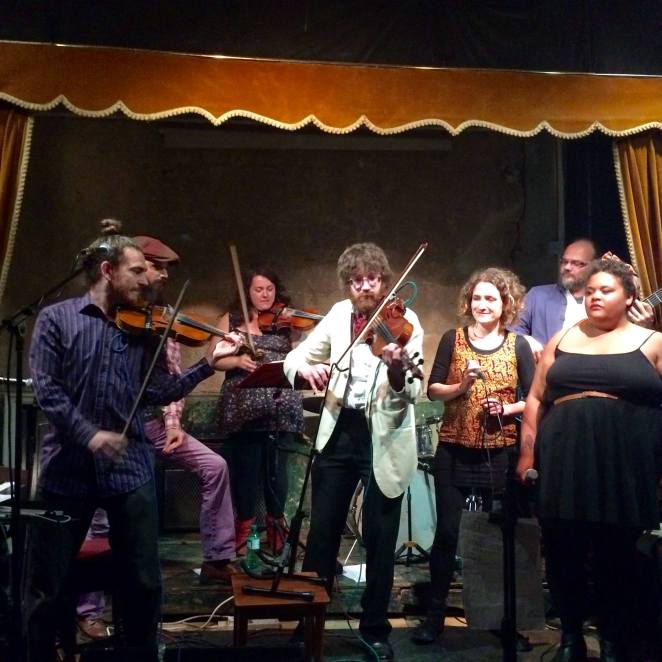 Gig at The Cellar, Oxford

with Isolde & Julia from BristolApril 24th, 2015
The big day is here.
The String Project
Blog at WordPress.com.